Costa Rica Rafting is a Feat to be Conquered

There’s a term thrown around loosely about Costa Rica having the highest river density in the world. That makes for great white water rafting in Costa Rica. It’s difficult to find the data to back up such a broad statement. But if you’ve been on a road trip here, the bridges and waterways crossed prove infinite.

With so many lushly forested canyons made rich and green by rain year tropical rains, it’s no wonder Costa Rica is a top destination for whitewater rafting. The tall mountains from the continental divide gather rain clouds that enrich Costa Rica with burgeoning rushing rivers for whitewater adventures that are an exciting adventure and a pleasure because they are not even cold!

There’s incredible added value white water in rafting Costa Rica because of the beautiful natural scenery and diverse wildlife. Rivers in CR have countless stone canyon walls with majestic waterfalls showering rafters as they pass underneath. The amount of local and migratory bird sightings are also a treasure for nature lovers. Monkey and sloth sightings are common, and a thrilling bonus!

White Water Rafting in Costa Rica, Only the Best

Pacuare River Class III & IV
The Pacuare River is the complete package. Most likely the best river for White Water Rafting in Costa Rica and one of the finest rafting venues in the world, the Pacuare River has two distinctions that set it above the rest. First, it boasts three, four or more hours of non-stop rapid action; in fact, the Pacuare has enough non-stop whitewater rapids for two full rafting days, which is why some rafters choose overnight lodging in one of the river’s cozy rafting lodges, including the Pacuare Lodge.  The other distinction is the sheer beauty of its surroundings, which has made the Pacuare famous for being one of the top 10 most scenic rivers on the planet.

Northern Costa Rican rivers offer some of the finest rafting to visitors in and around La Fortuna.

Sarapiqui River and Toro River Class III & IV
Sarapiqui River and Toro River are not too far from apart and serve each other as a Plan B river solution. These two beautiful Class III and IV rivers are born on elevated green volcanic slopes and drift their way into the Caribbean not without first offering its beautiful scenery and powerful 3 and 4 class whitewater rapids to those Costa Rica adrenaline seekers.

Upper Balsa River Class 4+
Upper Balsa offers 4+ white water rafting in Costa Rica for adrenaline junkies that are in the river for more than friendly high
fives. Class 4+ whitewater rafting is full of thrills but also requires concentration and a bit of discipline. It’s a blast!

Tenorio River Class III & IV
Guanacaste is more than beaches and volcanoes. Class III and IV whitewater rafting the Tenorio River is another attraction in this corner of Costa Rica. Tenorio whitewater rafting only a travel day to or from La Fortuna or Monteverde to the beaches of Guanacaste. Nature lovers should also think about visiting Rio Celeste. The only setback with rafting Tenorio would be during the dry season when this river is not very deep.

Rafting down the Corobici River is a great adventure for the entire family. The waters are relatively calm and allow nature lovers and birders to see ample wildlife. As you float down the river you’ll have plenty of time to see monkeys, coatis, otters up to 300 species of tropical birds and lush flora and fauna. Tours include bilingual guides, rafting equipment and lunch. Kids and grandparents alike will enjoy the calmer waters, beautiful canopy and playful monkeys as they ride down the Corobici River.

The Central Pacific coastline of Costa Rica is surprisingly growing in popularity when it comes to whitewater rafting.

Savegre Class II & III
Savegre River is the cleanest, most pristine river in Central America. Its beauty can be appreciated rafting down its class II and III rapids.

El Chorro Class 4+
El Chorro is a Costa Rican slang for a high volumetric flow of water in a reduced area, like the strong force of water coming out of a hose. Its name says it all. Class 4+ whitewater rapids with steep falls and narrow canyons, this river is truly and adrenalin delight. It only runs during the dry season.

Coto Brus River Class III & IV
Coto Brus River has some powerful class III and IV whitewater rapids. This river invites rafters from the area of Dominical Beach to tame its waters. Also, the Coto Brus River does not attract as many rafters as other whitewater rivers in Costa Rica. This makes it ideal for people looking for a smaller number of rafts tagging along.

Guabo River Class II & III
This river also is great for those staying in and around the area of Dominical Beach. Guabo has class II and III rapids for a fun nature day in the water.

El General River Class III & IV
El General III and IV rapids usually run in September to November, in the rainy season. Due to its remoteness, camping three or four-day whitewater rafting tours are only available.

White Water Rafting in Costa Rica is amazing, but you should learn the basics before your trip! Firstly, there are different classes of rivers. The easier classes are II and III rivers. Intermediate rivers are classes III and IV, and then there’s the expert class known as 4+.

Beginners in better shape can also have a blast rafting Costa Rica’s class III and IV rivers. It is best to have had some rafting experience before trying 4+.

Teamwork and close attention to your river guide is critical in class V rafting Costa Rica. The waters are fast and strong and your safety depends on focus and following instructions! 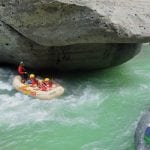 ass III whitewater rafting has plenty of enjoyment and intensity intended for beginners looking to have an excellent wet day in the outdoors and time to sight-see Costa Rica’s riparian wildlife.

Class II, III, and IV rapids in Costa Rica are loaded with energetic fun and nature, but those classes do not come close to the intensity of Costa Rica class V rafting. 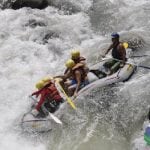 Not many outfits carry class V rafting, the demand is not as much as the lower class rivers, however there’s no other thrill in whitewater rafting than owning or being owned by the best in Costa Rica class V rapids.

Class V requires better professional equipment and better prepared rafting guides; communication is vital once the raft is let loose down the impending whitewaters of Costa Rica’s most powerful rivers.

Costa Rica class V rapids are usually found upstream down a mountain canyon where the water is most deep and abundant for an exquisite whitewater rafting experience. The country’s finest class V whitewater venues are near La Fortuna and Manuel Antonio, Quepos. 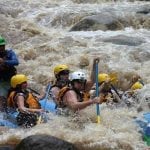 It’s no surprise that the adventure capital of Costa Rica, La Fortuna and the Arenal Volcano, comes with class V rafting.

The river with the Costa Rica class V rapids near La Fortuna is called Balsa River, in honor of all the Balsa Wood (Ochroma pyramidale) trees along its banks.

a is a favorite II and III whitewater location.

Upper Balsa is home to some of the finest Costa Rica class V rafting, with narrow rock canyons that will have your raft bouncing off the walls in no time. 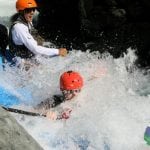 Costa Rica class V rafting on the central pacific part of the country, near Manuel Antonio, is down a three mile stretch in a narrow gorge carved into the rocks by a massive flow of water known as El Chorro.

El Chorro is a class V section of the Naranjo River with stronger currents through a labyrinth of tight rocks up in the mountains of Costa Rica that propel rafters on an adrenaline packed feat down an alluring rocky riparian canyon.

Home » Things To Do in Costa Rica » White Water Rafting