A great place to base your adventure in Nicaragua

The Hotel La Gran Francia in Granada, Nicaragua is a spectacular example of the best in Colonial Nicaraguan architecture! Though the actual date of the building is disputed, it was undoubtedly built shortly after the founding of Granada in 1524. Also, named after its most famous habitant the French Duke, Georges Praslin. Legend has it, escaped a murder charge in France. He did this by faking a suicide and living in exile in Nicaragua! Having survived many natural disasters and the burning of Granada by the American filibuster William Walker. This splendid ancestral building restored in the 1990’s and now houses 21 air-conditioned hotel rooms.

Close to Everything, Granada Has to Offer!

Located just on the main street in historic Granada. Hotel La Gran Francia is close to all of your city adventures! Granada prides itself on being one of Nicaragua’s safest and most beautiful cities. Also, La Gran Francia is a great place to base your adventure from! Whether you are here for business or to explore the amazing Masaya Market. In addition, is only 15 minutes away or any of the several nearby National Parks or beautiful islands on Lake Nicaragua. La Gran Francia offers you a relaxing and beautiful place to stay.

Everything about Hotel La Gran Francia is beautifully maintained. The attention to detail is legendary! Wood carvings and beautiful antique furniture grace the common areas and the individual guest rooms and the staff is helpful and knowledgeable about all things about the hotel and Granada in general. A delicious breakfast’s included for all guests, and two renowned restaurants are on the property, as well as a great lobby bar and another bar on the second floor. Each room comes outfitted with quality personal products and high-quality bed linens. All in all, the staff makes themselves attentive to all of your needs and will make sure that you have everything you need! 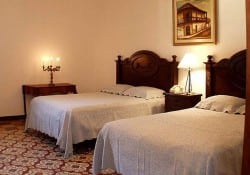 It feature two queen size beds, private bathroom, cable TV, air conditioning, ceiling fans and desk. They are situated at the ground floor, some classic are at the first floor and feature a small patio as well. 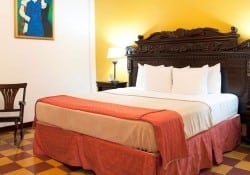 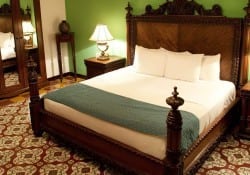 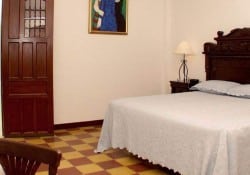 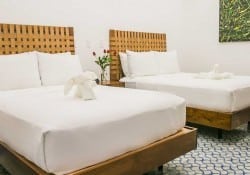 Deluxe rooms can feature two queen size beds or a king size bed. They have a private bathroom, cable TV, air conditioning, ceiling fans, desk. If the guests like to have extra space, there is the option to book a deluxe suite that has an extra lounge area.